Welcome to the Gathering Island

Do you know where the only royal palace on US soil is located? Welcome to Oahu, the home of the last Hawaiian Monarchy.

On your next trip to the islands be sure to plan to spend a few days in Oahu. Known as ’The Gathering Island,” it is one of the smaller islands but has a larger population than all of the other Hawaiian Islands combined. There is something for everyone on Oahu – unbelievably beautiful beaches, incredible restaurants, great shopping, and many tourist attractions. It is because of this variety that Oahu has such great appeal. If you like the hustle and bustle of a big tourist city then head down to Waikiki or downtown Honolulu. If you are looking for a more relaxing atmosphere, Oahu has that also. Slip away to one of the small surf towns or serene beaches on the north shore or the windward side of the island. 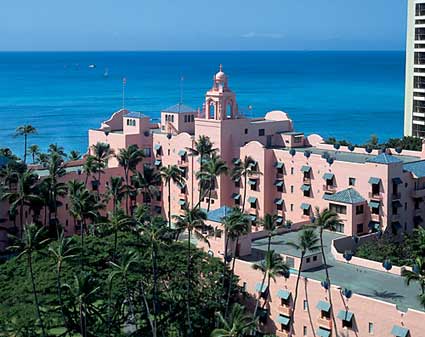 The best beach on Oahu is Bellows Beach. This five mile long white sand beach has brilliant turquoise waters and is postcard perfect with the softest sand on the island. When the waves are up, it is great for boogie–boarding too. Bellows is an Air Force base that is open to the public from Friday afternoons to Sunday evenings only. Bellows Beach is located between Waimanalo and Kailua off of Kalanianaole Hwy (Hwy 72).

The other great beaches on the island are Sunset Beach (North Shore Oahu), Sandy Beach (Southeast Oahu), Kailua Beach, and Waimea Cove (North Shore). I would be extremely careful swimming at Sandy Beach. It can be dangerous because of the very strong undertow and current. From Sandy Beach you can faintly see the islands of Moloka’i and Lana’i in the distance. Sandy Beach is also a wonderful place to watch the sunrise and collect seashells in the early morning.

Close to Sandy beach is a scenic lookout called Blowhole, where water spouts like a geyser up through an old molten lava tube. If the surf is right, the water coming out of the Blowhole can reach 30 feet high. To the right of Blowhole, there is a small cove the locals call Cockroach Cove where every so often you can find endangered Hawaiian green sea turtles swimming around. During whale season (November – April) you can occasionally see humpback whales along the coast of Hanauma Bay to Sandy Beach.

At the heart of Oahu is Waikiki, a place that never sleeps. In Waikiki, there are things to do and places to go 24 hours a day.

Some of Oahu’s best activities and tours include; Sea Life Park (Waimanalo), snorkeling in Hanauma Bay, experiencing the luau at the Polynesian Cultural Center (Laie), the Bishop Museum (Honolulu), hiking Diamond head for the best photo opportunities, the Honolulu Academy of Arts, and of course the U.S.S. Arizona Memorial at Pearl Harbor (I recommend getting there early because the lines get really long).

One sightseeing must–see is the Pali lookout which is nestled in the Koolau Mountains overlooking the 985 foot high cliffs of the Koolau Mountain Range. It is one of the best views on Oahu with views of Kaneohe Bay and most of the western part of the island. In 1795 King Kamehameha and his warriors defeated the Oahu armies by sending them over the steep cliffs and the King claimed his victory thus uniting all of the Hawaiian Islands. To get there take the H1 Hwy. east bound from Waikiki, exit onto the Pali Highway, and follow the signs to the Pali Lookout. Be sure to hold on to your hats – the wind comes off the ocean and up the mountains pretty strong.

Talk to us about adding a few days in Oahu to your next Hawaiian vacation and make your trip truly memorable. And lest we forget, be sure to visit the Iolani Palace, home of the last Hawaiian Monarchy, it's located in Honolulu.

Have a wonderful vacation!  See you in paradise!